REVIEW: The Dresser by Ronald Harwood 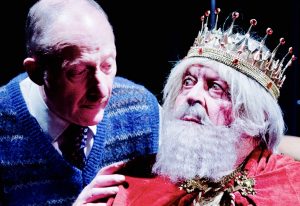 Set backstage in a provincial theatre, The Dresser, covers the events of one evening before and during a performance of King Lear. Sir (Ian Klemen), the autocratic actor-manager of the company, arrives late at the theatre in a sorry state, unwell, uncertain and with intimations of mortality. Norman (Bill Allender), his dresser, takes charge and by dint of flattery, cajolery and bossiness succeeds in getting him on stage. Both men had assurance and finesse, excelling in their characterisation, and their often complicated stage “business”. Particularly impressive were Sir’s application of his make-up, repeatedly interrupted by his own musings, and Norman’s surreptitious addiction to the brandy bottle from his pocket, along with his general pernickety fussiness. He also delivered a nice line in nastiness when defending Sir’s (i.e. his) privacy from the women.

Her Ladyship, Maxine Roach, Sir’s partner, wanted to be married to him, but was blocked by his hopes of a knighthood. Maxine Roach displayed a sensitive balance between loyalty and resentment at her status. Madge (Suzanne Mayor), the stage manager, was suitably bossy, angry both with Norman for blocking access to Sir, and with Sir for not recognising her unrequited love over her years with the company. David Harding, a bit-part actor promoted to play the Fool, showed a good mixture of pleasure and apprehension at the prospect; his ill-fitting costume and nervousness reflected his Thespian gaucheness. Irene the ingénue, Bella Grifffin, was charmingly keen and flattered by Sir’s attention. Mr Oxenby, (Neil Sellman), frightened Sir, who would not read his play, but he too overcame his self-righteousness to ensure that the “show must go on”. Terence Hattermore and Nick Griffith (two knights) performed their brief parts cheerfully.

This production was a high quality take on the well-known study of an actor-manager and his touring company. The cast was strong and believable throughout. Considerable thought had gone into the stunning set, costumes, props, lighting and sound, with authentic touches that evoked the World War II period in which the play is set. Director Peter Mould had crafted an ensemble show of distinction with exacting attention to detail running through the performances and the overall look and atmosphere of the piece. With its fine balance of humour and serious themes, and its perfect pace, this was a production to be savoured that would have impressed on a professional stage.