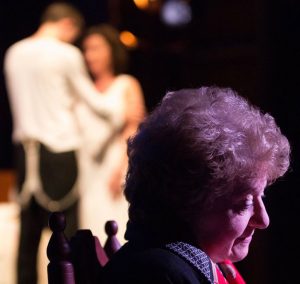 This production continued the Stables thought provoking 2016 season. The play’s theme is the effect of the past on the present, requiring scenes from different times played out simultaneously on a split level stage; it was impressively done. Many characters had to project the conflict between their mixed Italian and English cultural background, and their Catholicism. Italian and Irish accents had to be mastered. Projections, music and sound effects worked well, enhancing the action.

Most of the minor characters played two or three roles. Ian Morson acquitted himself well with the Italian paterfamilias, Eduardo, and an Irish priest. Alan Haynes, as Bruno Mare played a wonderfully self-satisfied older brother amongst other roles.

Nonna (Leonora), played by Dianne Cheesewright, is a grandmother living in old age with her daughter’s family by the seaside. The story starts with her marriage as the younger Leonora, acted with great conviction by Joanna Poulton, to the charming Alfredo, elegantly portrayed by Peter Miller. The action loops between the present and past of their fractious and fractured marriage.

Dianne Cheesewright as Nonna is on stage for much of the play and gave a combative and humorous performance of a woman gradually relinquishing her hold on the present, though not without a fight. We are shown poignantly the losses old age brings: Nonna has a difficult relationship with her elder granddaughter Gianna, played by Izzy Riggs, but a closer one with the younger Anastasia, a role shared equally well by Izzy Bissenden and Rosie Richardson. The connection between them fades as Anastasia grows up. The sister’s relationship is contrasted with that of Nonna’s daughters: Theresa, (Sophie Allender) and Gioia, (Abigail Storey) – one more pliant, the other implacable.

Alfredo vies with Nonna for the most important role. His actions and how they are viewed by his family reverberate throughout the play. For Alfredo soon tires of Leonora, falls in love with Julia Jarret, and decamps with her to Ireland. Bertie Hustwayte’s performance as Julia brought great dignity to the role of the “other woman”. James Crouch as Peter Mare, does the same as the other woman’s son. In death Alfredo is reunited with his first family, much to Nonna’s satisfaction.

With its many scenes spanning the characters’ lives, the play is challenging to stage but the cast, and their director Jane Richardson, created an assured production. This rarely performed play provided a deeply absorbing and moving evening.