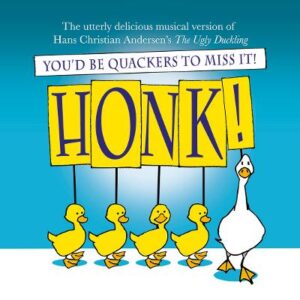 “A Musical Tale of “The Ugly Duckling”

This amateur production is presented by arrangement with Music Theatre International. All authorised performance materials are also supplied by MTI.

Christmas 2022 “A Celebration of Being Different”

‘Honk’ – the musical by George  Stiles and Anthony Drewe ( also responsible for new stage versions of ‘Mary Poppins’ ‘Half A Sixpence’ and ‘The Wind in the Willows’ ). Based on The Ugly Duckling by Hans Christian Anderson. 4 m 4 F or a few more if needed. Our daughter Elly directed it in 2006 at the Edinburgh Fringe, performed in a small venue and sold out for a month – the only Royal Holloway show ever to do so. I think its delightful and very funny.Simple music and lyrics even for non-singers. Interestingly first performed at the Watermill Newbury and then transferred to Stephen Joseph Theatre in Scarborough and The National Theatre– before going around the world in over 8000 productions picking up Olivier and Tony awards

The authors and all the productions I know of never envisaged feathery body suits, masks or beaks. Where possible they thought of the human counterpart of each character and used that as a basis for both the costume design and the way in which the part is played. In the script they refer to judiciously placed baseball caps giving the impression of ducks beak or a set of red hair-rollers bear an uncanny resemblance to a chicken’s comb. They also refer to the Ducklings as very trendy schoolchildren with baseball caps, whilst Ugly is like the class nerd in grey shorts, blazer and sandals.

We are looking for an imaginative, active ensemble cast willing to contribute lots of ideas and to move well. As Stiles and Drewe also write ‘we’ve found that ‘Honk!’ works best when the characters are played with real conviction truth rather than as cartoons. If the audience can believe in, identify with, and care for the characters then you will have an evening both comedic and moving’

There are over 30 different roles, but to keep all the actors involved it is suggested that doubling is used, indeed a lot of the fun of ‘Honk!’ comes from seeing the same people playing a variety of comic characters. My experience of directing ‘The 39 Steps’ and seeing recently the magic of ‘The Snow Queen’ shows this to be an essential truth. So we start with the following doubling:

Younger Actors between 16 and older (We do not want chaperones)

The whole company play the roles of Fish and Froglets. Two members of Stage Crew play Floor manager and Cameraman.

Ugly – the youthful protagonist. Gawky and odd looking and shunned for his odd appearance. Then transforms into and elegant dancing swan

Cat – the story’s antagonist. Sly, cunning, elegant very hungry cat who preys on his next meal

Greylag – a goose and the Group Captain of the squadron charged with Ugly’s safe return. Dot’s husband

Turkey – The School Headmaster who is self-basting, self- boasted prime specimen. Deadly afraid of Thanksgiving and Christmas.

Bullfrog – Looks not unlike a plumber in green overalls.

Ida – Ugly’s loving loving mother and the only person who is supportive of the outcast child.

Grace – Most distinguished duck on the lake and the school governor. Proud, honest and genuine.

Henrietta – A friend of Maureen and Ida’s, somewhat of a busybody

After the Familiarisation on 12th June scores and scripts will be available. Those who wish to audition will need to perform one or more songs from the vocal score. At the Familiarisation afternoon we will give guidance on the dialogue pieces. These will be open auditions.

Ida – The Joys of Motherhood

Cat -You can Play with your Food

We will start rehearsals in September and will include some intensive weekend sessions at the end of November and into December. Provisionally we have booked Mondays, Tuesday andThursdays for rehearsals, but not everyone will be required for the early rehearsals There may be some rehearsals devoted to movement /dance and music. We will be on stage from the beginning of December. Come along and get involved, the aim is produce a very funny magical show for Christmas.