REVIEW: Toad of Toad Hall by A. A. Milne 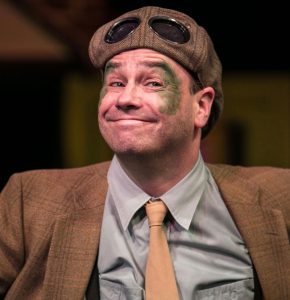 Having played the role of Mole in a previous production of The Wind in The Willows (1999), I looked forward to Toad Of Toad Hall, and the happy memories it was sure to evoke. The evergreen childhood story, loved by countless generations, held a special memory for me, and Michael Boakes’ production succeeded admirably in rolling back the years.

The opening and closing scenes, written by the Director, were set in a disused attic with four friends discovering, and subsequently reliving the tale; here was originality and imagination.

And so the story unfolded with many great performances. Charlie Abraham played a truly wonderful Mole with total innocence and infectious excitement at the wonders of everyday overland life. Daisy Estall’s performance as Ratty displayed a firm upper class character, clearly in control of all situations and with endearing loyalty and friendship to Mole. Michael Wilson delivered yet another stellar performance, this time as confirmed old bachelor Badger, and Matt Davis brought superb character, enthusiasm and humour to the role of incorrigible Toad. All four characters, pivotal to the story, were performed to perfection.

But four actors cannot carry a production such as this. The supporting cast did not disappoint, all working well as an ensemble, managing the many quick costume and character changes and contributing hugely to the success of the piece as a whole. Annie Edwards’ Alfred was a joy to watch, Simon Hookey’s Chief Weasel was genuinely nasty and Julia Dance’s Washer Woman stood out as a cameo performance in the second act.

Visually the split level staging was used to great effect, creating different settings, from the riverbank to the sinister Wild Wood, to the grandiose Toad Hall. All scenes were swiftly changed with joyful glee and enthusiasm by a band of mice. Credit also to the technical team, who devised and operated the wonderful snow falling effect, creating for me one of the most delightful winter scenes I have seen at the Stables. Good lighting, and choice of live music performed by Music Director, Robert Connelly, who deservedly took a curtain call, also enhanced the production. An excellent array of costumes by Julia Dance complemented the characters.

This was an ideal production for December. I had had a great evening out and was now looking forward to Christmas. The production and its story reminded me of younger days when life seemed simpler.