REVIEW: The Thrill of Love by Amanda Whittington 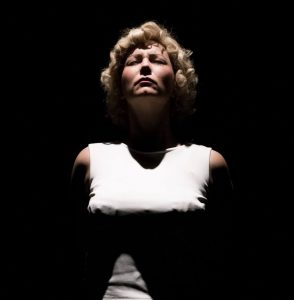 The provocative film-noire opening of Amanda Whittington’s ‘The Thrill of Love’ set the scene for a tightly-woven story, imaginatively directed and designed by Rodney Figaro. Based on actual events in 1950’s London, the play focused not on who-dunnit but why she did it. The audience came to understand and feel sympathy for the abused and driven woman who will be forever remembered as the last to be executed in England – Ruth Ellis.

Claire Bolt, as Ellis, achieved the difficult task of playing the woman known for murdering her lover, enabling us to see her as much more than a one-dimensional character, with love for her children and high hopes for the future. Her disastrous marriage and complicated extra-marital relationships were a malign influence during her short life – she was only 28 when she was hanged. These facts were revealed in shocking detail during the play, the consequences of which were skilfully depicted in a performance revealing the darker, damaged corners of human relationships.

David Morley as D.I. Jack Gale gave us an assured and utterly believable portrayal of the world-weary, seen-it-all detective seeking to uncover the facts of what appeared to be an open-and-shut case. Initially cynical about Ellis’ motives, his sympathy for her plight grew as the story unfolded and we hoped his final desperate attempts to get her to avoid the noose would prevail.

Hidden beneath a veneer of protective swagger, the lynchpin of the unfolding story was the street-wise hostess of the club at which Ellis worked, with Lisa Harmer-Pope revealing Sylvia Shaw’s big heart and an obvious care for the girls in her charge. Smoothly weaving between the worlds of smoky bars and fast cars came Jennifer Mclean as Vicki Martin, an ambitious model and actress with an eye on the main chance, treating us to some stinging put-downs delivered with a wink and a vivacious smile. Caroline Gurdon as Doris, the club’s charwoman, grounded her scenes with a simple marked contrast to the seedy world of the club and its loose-living clients.

The thoughtfully designed combined set enabled all the action to take place without scene changes, dominated upstage by the club’s bar and the detective’s office downstage. Intersecting these two worlds, Ian Klemen’s gravitas as the prosecuting barrister highlighted the difficult decision faced by the jury. Was she guilty? Yes, by her own admission. Should she have hanged?  That was another question entirely.