The Old Silk Road to Afghanistan 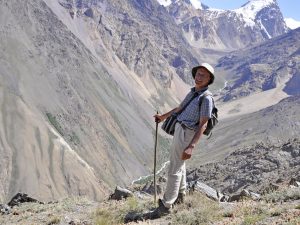 In 2011 John followed a spectacular branch of the Silk Road, starting in

the Caucasus and crossing the Caspian Sea to Bukhara, Khiva and

Samarkand. Then, reeling from the beauty of those legendary cities, he

of the Oxus in the heart of Central Asia.

John is one of Britain’s most experienced adventurers and public

speakers. After a career as an author and photographer, he spent many

years with the BBC World Service and Radio 4, making travel

documentaries and contributing to programmes such as ‘From Our Own

Correspondent’. But it’s for his thought-provoking, beautifully

illustrated talks that people know him best. He has spoken to over 1,000

audiences in six countries, and holds the Royal Geographical Society’s

much-coveted Ness Award for popularising geography and the wider

understanding of the world.