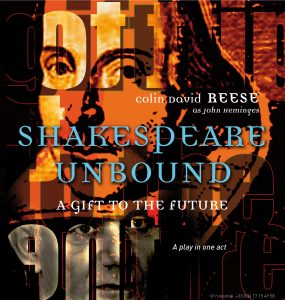 John Heminges returns to his house on the site of the Globe Theatre with a precious package – the first edition of Wiliiam Shakesepeare’s “Comedies, Histories and Tragedies”.

Heminges and Henry Condell have spent seven years since William’s death looking through prompt books, cue scripts, plot sheets, William’s own writings, searching through the Tiring House of the Globe and studying previously printed versions of his plays. Finally they amassed an exhaustive collection and produced this wonderful document.

Sitting down to study the result of his work, John Heminges reminisces about his life-long friendship with “Young Will” which had started 36 years before, in the White Swan in Stratford.

As he starts to read through the plays, the memories come flooding back – of performances, backstage intrigues, successes and disasters and above all the importance of preserving the writings of a genius who was “not of an age, but for all time” as Ben Jonson so cogently wrote in the introduction to what we now know as Shakesepeare’s First Folio.