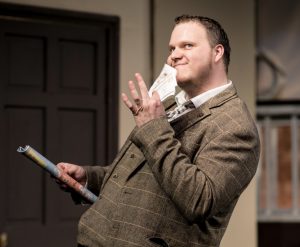 There are two kinds of play, those that make you think and those that entertain. One Man, Two Guvnors by Richard Bean falls firmly in the second camp and Chris Lacey, an annual provider of post-Christmas fun and frivolity at the Stables Theatre, chased down the rights to perform the most popular West End play in recent memory, providing an enthusiastic cast and, I suspect, many a full house, with the opportunity to set their intellectual pretensions aside and simply enjoy the fun.

One Man, Two Guvnors demanded and amply received from Kitson Wellard a central performance of brio and charm as the One Man whose attempts to hold down two jobs, feed himself and seek romantic satisfaction drive the play to its conclusion. Brilliantly capturing the mood of the piece, throwing himself, often literally, into every situation and engaging with the audience through the deliberately flimsy fourth wall, Kitson Wellard raised the play to a higher level than can reasonably be expected on the amateur stage.

Admirable support came from Nick Griffith as Stanley Stubbers – few will forget his display of bodily hair, so entertainingly paraded – in another adept performance easily crossing the divide between performing and wryly commenting for the audience’s benefit. So too with Carey Poole’s knowing performance as Alan, the would-be actor. Zola Thomas, playing the principal romantic interest with relish and some welcome feminist feist, won our sympathies and resisted being simply the plaything of the plot.

As plots go, it must be said, this one weaves a contorted dance, with little room for either audience or players to keep up, but it doesn’t matter. Likeable spivs Philip Blurton and Neil Mitchell dallied with Bill Allender’s seen-it-all lawyer. Sophie Allender played the young love pledged to Claire Bolt’s murdered brother but seemingly off down the aisle with his sister in drag (I told you the plot needed some following). Peter Elliott held down multiple roles and Rob Dyer’s genuinely amusing elderly waiter, whose attempts to uncork a wine bottle should win awards for best grimace and if there’s no such award, it should be initiated forthwith.

Successfully starting another packed year of productions, One Man, Two Guvnors was a worthy opener. 2017 is under way…