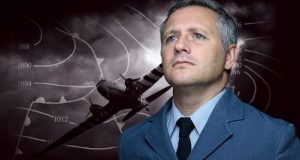 It’s June 2nd 1944. The clock is ticking down. In 72 hours, 350,000 troops are to cross the Channel in operation Overlord. The fate of the 350,000, the future of Britain, Europe and the United States rests on one single weather forecast.

David Haig’s story is about the unsung heroes. Packed in its tightening isobars are the personal battles and pressures of responsibility that weigh heavily on those who must make the decisions. Two meteorologists with different forecasts. One General whose decision is about to change the course of history.

Ticket information:
Adults: £13.50
Under-18: £10.50
Members: £8.50 (Members are advised that when booking online you are required to log into your account before selecting your tickets.)