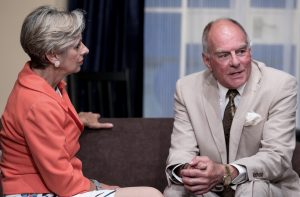 Neil Simon, one of America’s best known comic playwrights, sets four short plays in a London hotel suite.  In the first, Settling Accounts, the suite is occupied by Brian (David Ames), an inebriated Welsh author holding Billy (Ian Saxton), his long-term business manager, at gunpoint after discovering him running off with his life-savings. Explanations for Billy’s actions become increasingly unbelievable as Billy tries to talk himself out of his predicament.  It was an intriguing storyline but more tension needed to keep us on the edge of our seats.

In the second play, Going Home, an American widow and her daughter are in town.  A cleverly scripted reversal of roles has mother Sheryl (Pauleen McLaughlin) hitting the town with a rich Scotsman while daughter Lauren, (Kim Howell) waits up for her return and an account of events.   This was an endearing, funny story, with naturally convincing performances and an engaging chemistry between mother and daughter.  Accents were good too.

Next in were Diana (Jenny Lloyd-Lyons) and Sydney (David Morely).  Diana is a wealthy actress, in London to promote her television series, and to meet Sydney, her bi-sexual ex-husband whom she’s not seen for many years.  This felt the wittiest and most moving of the plays, requiring actors to wrestle with superficial pleasantries as well as much deeper issues; both leads gave absorbing performances that achieved the aim.  The icing on the cake was a wonderfully dry cameo by Helen Pierce as Diana’s personal assistant.  This was a play of many layers with performances that uncovered them, and not without a few tears being shed along the way.

And finally, the farcically funny, The Man on the Floor.  A married couple from New York have lost their Wimbledon tickets.  Husband Mark’s (Wayne Herbert) back seizes up in the crisis and down trodden wife Annie (Aisling Edie) is left to cope.  Soon Mark is joined in agony on the floor by a bumbling Dr McMerlin (Gerald Turner).  Hotel staff played by Dianne Cheesewright and Dick Kempson add to the mayhem.  The slapstick was played up well, bringing the evening to a close with plenty of laughter.

Projected images and period music helped set the 1990s London scene and cover the breaks between each play.  The set looked like a hotel suite and costumes were right for the era.  Director, Leslie Adams, gave us four distinct but linked productions in a single space.  It was an interesting premise which the Director and his team pulled off.