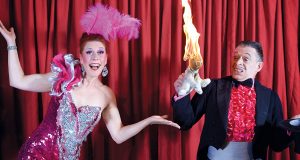 Tickets £15 to include welcome drink and canapés

An evening in support of Prostate Cancer Research featuring the dazzling radio play Last Tango in Little Grimley followed by the astonishing magic of Duo Bogof.

Join us for a light-hearted and informative evening to help us raise money for the da Vinci Surgical System and prostate cancer research. Every penny raised will go to these important, life-saving projects. All entertainers are freely volunteering their time.

Complimentary glass of wine and canapés to be served from 6.30pm – with Mike Hatchard on piano in Art Gallery.

The Little Grimley amateur drama society is on its last legs. They owe rent and the hall is to be sold. Thus begins a chaotic evening of home-grown drama that anyone who witnesses it is unlikely to forget in a hurry.

Later this evening Duo Bogof will confound and delight with their old-style magic using film and live tricks whilst just about managing to hold the show (and their relationship) together. Equipped with their trusty video camera, a handful of props and the belief that anything is

possible, Duo Bogof will amaze with their theatrics, split-second timing and cinematic loop-the-loop. Real-time action spins off into a parallel realm where fantasy and reality fuse and Moebius strip meets comic strip. It will leave you questioning the reality you see.

“An hilarious and brilliantly clever act of timing and tricks of the lens.” Broadway Baby

During the evening there will be a presentation from the Eastbourne District General Hospital team explaining the value and benefits of the da Vinci robot operating device in a range of modern surgery.

Ticket information:
Adults: £15.00
Under-18: £15.00
Members: £15.00 (Members are advised that when booking online you are required to log into your account before selecting your tickets.)