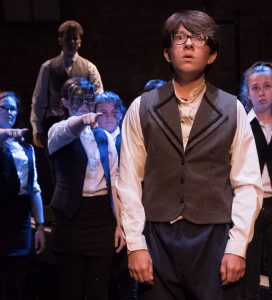 The Stables’ 1066 Youth Theatre performed David Copperfield with steampunk style, strong performances from principals and excellent ensemble work from the company.   The challenge of telling a sprawling story with large cast was well met, and the production entertained without losing the audience in its detail.

The action took us from the hero’s childhood, the loss of his mother and his sufferings, both at school and at the hands of his stepfather, and follows him through to adulthood, his besting of the villainous Uriah Heep, and on to fulfilment and success.  Thom Collett and Harper Jackson shared the role of David as boy and young man. Both brought out the affability and imaginative side of the character but also his steel and determination.  The transfer between the actors was neatly managed, and a good example of the clever direction from Neil Whitehead, Barbara Ward and Maureen Nelson.

The Dickens villains are properly evil.  Mr Murdstone, played with apoplectic rage by Lucas Mckenzie, terrorized the young David, and, with his sister Jane (Alice Loosely), steals his mother’s money. Uriah Heep, antagonist of the adult David, slithers out of a travelling trunk to attempt the ruin of those around him; Emily Cooper captured the cringing of Heep and injected squirming menace into her portrayal.

The ensemble and crowd scenes amplified the performances particularly the scenes at Creakle’s school and the bottle factory.  Another confident touch was enabling the cast to share the narration, connecting disparate episodes and recurring characters and themes.  The uncluttered visually appealing set was well used by the cast to evoke various scenes, and the minimal period costume coordinated well.  Lighting effects, particularly for the shipwreck and the death of Dora, were successfully handled.

1066 Youth Theatre is a new venture from the Stables theatre who are keen to build on last year’s successful Root 1066 festival production.  The focus of their project was to provide opportunities to build performance and production skills while working on an intensive two week project, culminating in a run of performances. Their production of David Copperfield achieved their goal.  It was as much a joy to watch as it seems to have been to take part in.  Looking forward to next year already.