There is something so compelling about a courtroom drama. It’s hard not to be drawn in by a desire to know whodunit – and that’s why they make such good theatre.
Cause Célèbre is old-fashioned in the sense that life was very different in 1930s Britain, but it stands the test of time because, perhaps alarmingly, some attitudes haven’t changed!
The courtroom scenes presented in the play have been lifted straight from the transcripts of the trial and all the characters, apart from the Davenport family, were real people.
This final play by Terence Rattigan initially started life as a radio piece, ultimately finding its way to the stage just months before his death in 1977.
Rattigan was fascinated by the sensational Rattenbury murder trial at the Old Bailey in 1935 which concerned an elderly architect, allegedly battered to death by his much younger wife Alma, or George Percy Stoner, their handsome odd-job boy, or both.
The popular press had a field day with tales of sex, drugs, alcohol and gore plastered across the papers and had the public screaming for vengeance on this scarlet woman who was judged more for being a woman with a sex drive than for being a potential murderess.
It was the first double trial in history where the defendants tried to exonerate each other and take all the blame themselves.
“No one alive writes with such understanding of sexual love or with such profound pity for its victims.” Daily Telegraph, London
“One leaves the theatre marvelling afresh at Rattigan’s ability to mix gripping entertainment with such a moving depth of compassion.” The Guardian, London
Guilty or not guilty? Will be ever really know? 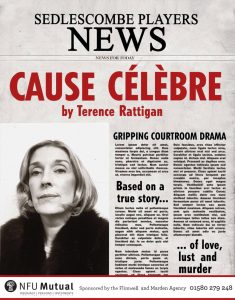