The Queen of Madagascar 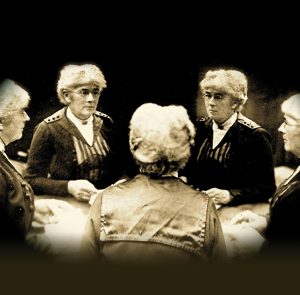 PART OF A SEASON OF FOUR NEW PLAYS.

“To believe takes determination, repetition – and an awful lot of practice”

Elizabeth Horne communes with the dead in her drawing room.  Her devotees include Lady Blount who believes the world is flat, Reverend Aiken who believes in polygamy, and Mrs Christie who believes everything she’s told.  But when Elizabeth invites an unlikely new member to their Sacred Circle, not only are their beliefs challenged, but all their lives are changed.

The Queen of Madagascar is the true story of a remarkable Edwardian scandal, exposing how the human need for hope can convince us to hold to radical beliefs, even when they defy common sense and scientific fact.  The comedy is based entirely on original letters, court transcripts, newspaper reports and inherited family stories, Elizabeth Horne being a relation of the author.