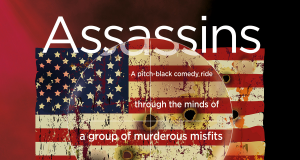 BOOTH “Murder is a tawdry little crime; it’s born of greed, or lust or liquor. Adulterers and shopkeepers get murdered . But when a president gets killed, when Julius Caesar got killed… he was assassinated.”

A man sits in a storeroom on the sixth floor of a Book Depository in Texas in 1963, waiting for John F Kennedy’s motorcade to pass below. He rests his finger on the trigger, ready to join a line of men and women who have shot their way into the history books.

Created by the greatest living musical theatre writer, Stephen Sondheim, with book by John Weidman, Assassins is a satirical and stylish look at why individuals reach for a gun when they feel their voice can’t be heard. This multiple Tony Award-winning vaudeville-style show is bold, original, disturbing and alarmingly funny.

A musical about the power of the President, the lure of celebrity and the failure of the American dream. Assassins is perhaps the most controversial musical ever written.