An English Man in Patagonia 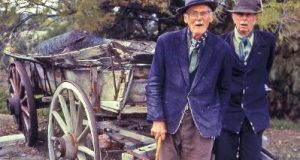 Patagonia- It’s the stuff of dreams!

Back in the mid 1990s  John spent three seasons exploring the southernmost part of South America which included Tierra del Fuego, he walked amongst glaciers, met gauchos (Patagonian Cowboys) and took tea with the tiny but still fiercely independent Welsh community who have inhabited the area for over 150 years.

John will guide you through the sheep pioneers who in the late 19th century and early 20th century left their homes and sought a better life in the vast pastures of the Patagonian southern states, he will describe the dangerous sea journeys and their efforts to set down roots against almost impossible odds

John will also explain a little about the modern day battles the area faces with climate change and to finish he will tell you what really happened to two of Patagonia’s most notorious settlers – Butch Cassidy and The Sundance Kid!….

With Johns stunning photographs and wonderful story it makes this a talk not to be missed!